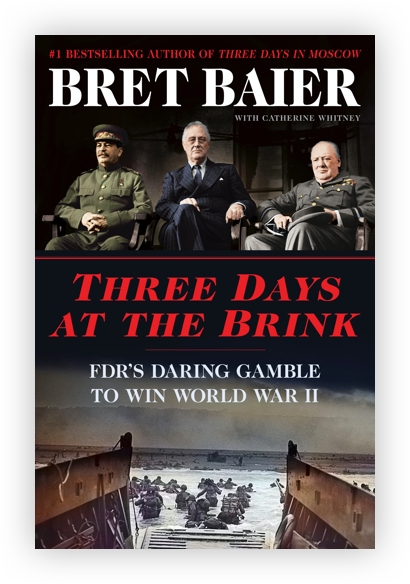 From the #1 bestselling author of Three Days in Moscow and anchor of Fox News Channel’s Special Report with Bret Baier, a gripping history of the secret meeting that set the stage for victory in World War II—the now-forgotten 1943 Tehran Conference, where Franklin D. Roosevelt, Winston Churchill, and Joseph Stalin plotted the war’s endgame, including the D-Day invasion. Three Days at the Brink is available wherever books are sold. 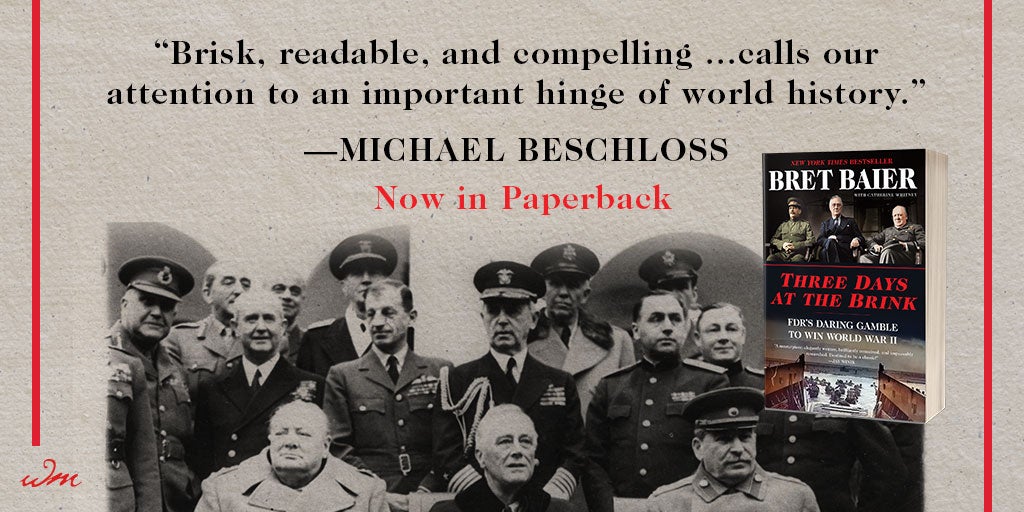 The inside story of the first of the secret World War II meetings between President Franklin D. Roosevelt, Winston Churchill, and Joseph Stalin, which would shape the world for decades to come, adapted for young readers from the book by #1 bestselling author and Fox News Channel anchor Bret Baier. 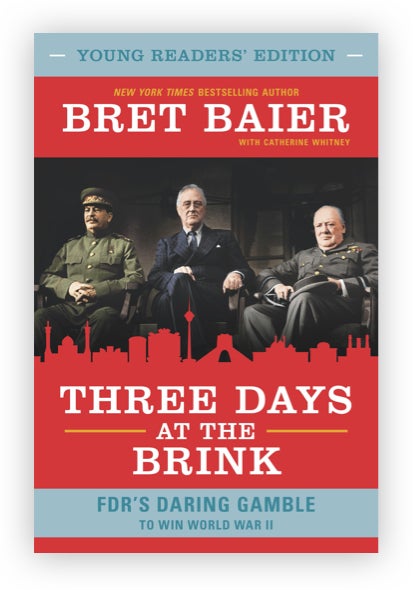 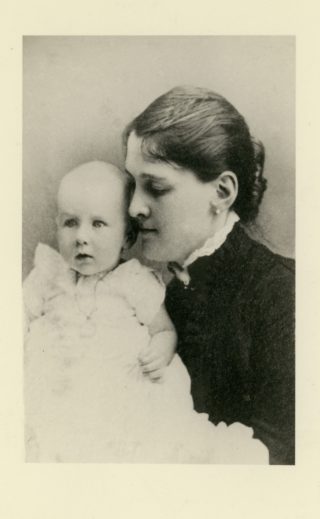 “Did I ever think when he was little that Franklin might be president?” Sara Roosevelt wrote. “Never, oh never!” However, from the day of his birth, on January 30, 1882, Franklin was the only star in his mother Sara’s galaxy. (Franklin D. Roosevelt Presidential Library) 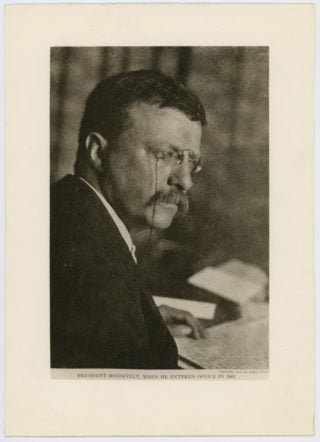 President Theodore Roosevelt was the family idol, and young Franklin did everything he could to emulate his cousin, including following him into politics and the presidency. He even took to wearing pince-nez instead of glasses, and mimicking the president’s expressions, such as “de-e-e-lighted!” (Franklin D. Roosevelt Presidential Library) 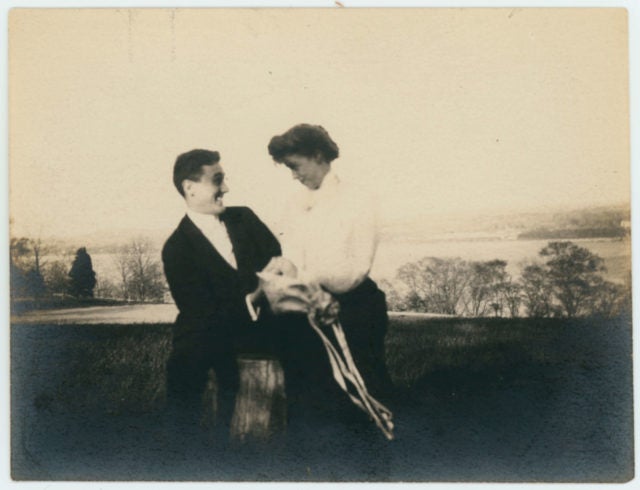 When Theodore’s niece Eleanor caught Franklin’s eye, theirs might have seemed an unlikely courtship. He was ebullient and sociable by nature, and she was painfully shy and inexperienced with men. But Franklin appreciated her depth and her interest in the world. Their long marriage was hardly smooth sailing, but they were a powerful team. (Franklin D. Roosevelt Presidential Library) 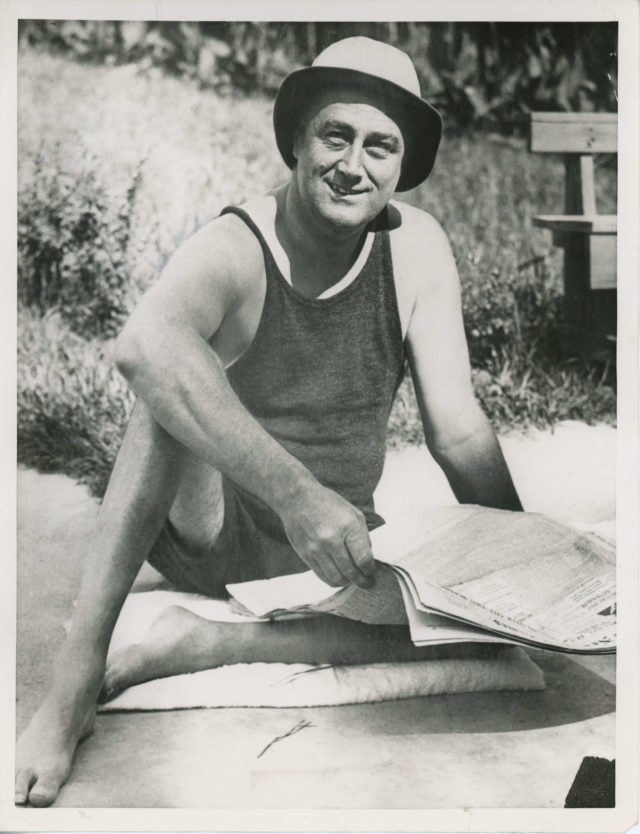 Until the age of 39, Franklin led a charmed life, but poliomyelitis struck him down. He would never walk again. However, his greatest crisis strengthened him in other ways. Many historians have observed that were it not for this crucible he never would have become the president he was. For the rest of his life, he found solace at Warm Springs, the rehabilitation center in Georgia, where he developed a deep kinship with his fellow “polios.” (Franklin D. Roosevelt Presidential Library) 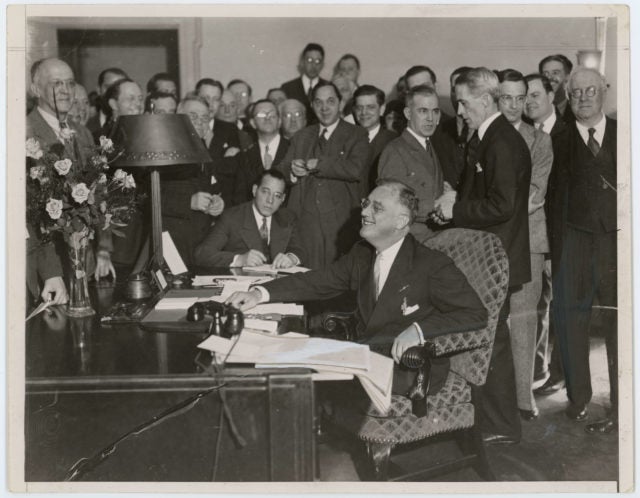 Elected president in 1932, FDR was determined to shake things up. He instituted twice weekly press conferences right in the Oval Office, with reporters crowding around his desk. Since no women were allowed, Eleanor instituted her own press conferences for female reporters. (Franklin D. Roosevelt Presidential Library) 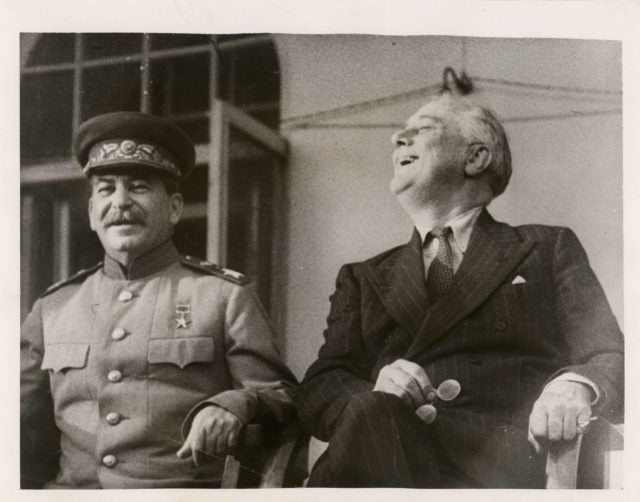 In their first meeting in Tehran, FDR and Joseph Stalin hit it off, sometimes making jokes atWinston Churchill’s expense in order to cement their relationship. But the underlying debate over which strategy would win the war was deadly serious, and Churchill was often at odds with his counterparts. They knew the world was at the brink, and the direction they chose would make or break the Allied cause. (Franklin D. Roosevelt Presidential Library) 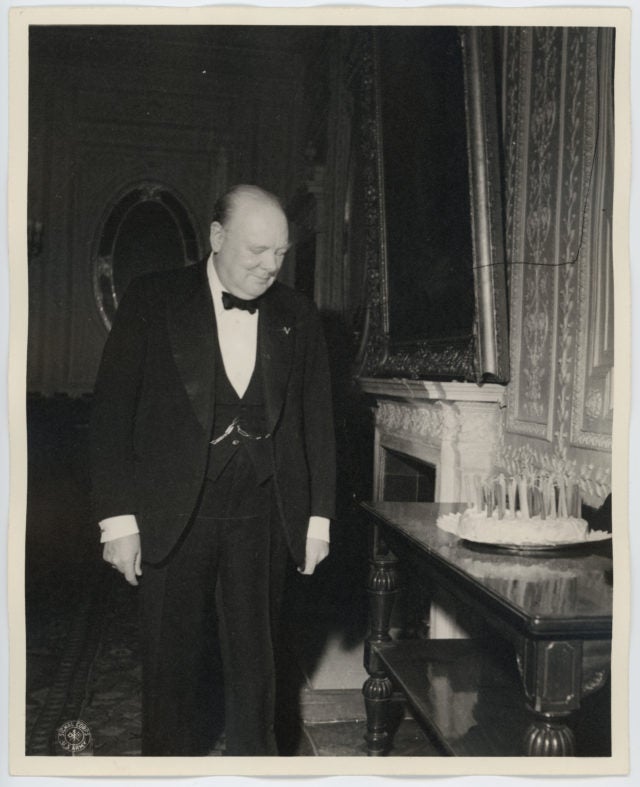 On the last night of the Tehran conference, Churchill celebrated his sixty-ninth birthday with an elaborate party. Champagne and toasts flowed, and there were many expressions of goodwill. However, Churchill remained troubled by the decision to go ahead with Operation Overlord (D-Day) the following year. (Franklin D. Roosevelt Presidential Library) 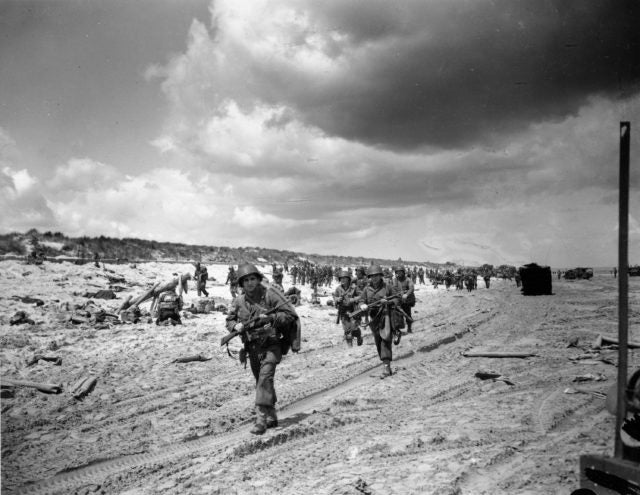 On June 6, 1944, the Allies launched the invasion planned in Tehran. Operation Overlord was the decisive battle of World War II. Even today, on the 75th anniversary of D-Day, we are moved by the raw courage of the men who stormed the beaches at Normandy. Many did not survive, but the course of the war was shifted toward victory. (AP Photo/Peter Carroll) 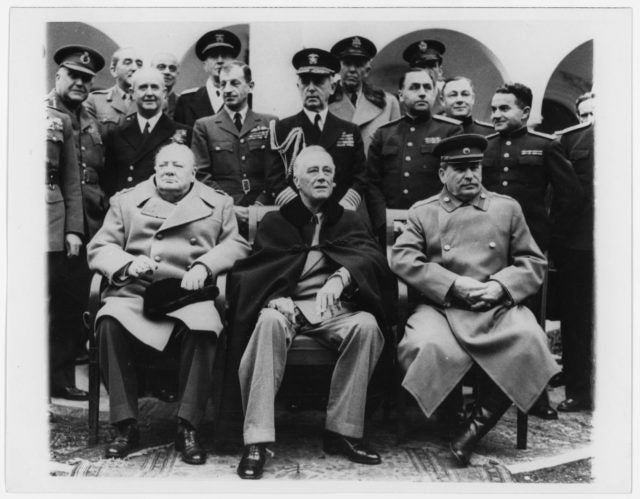 With the war nearly at an end, FDR, Churchill and Stalin met at Yalta to plan the post-war world order. FDR was thin and weak, and perhaps his guard was down. At Yalta, despite Churchill’s protests, he gave in on some critical decisions, most notably the future of Poland. It would later become devastatingly clear that Stalin was not an honest broker. (Franklin D. Roosevelt Presidential Library) 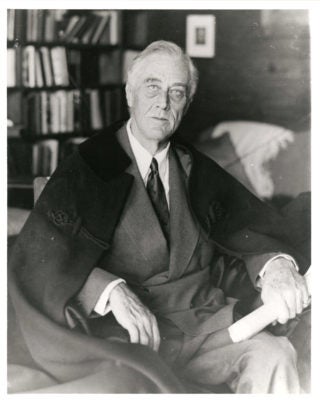 On April 11, 1945, FDR was in Warm Springs to rest and recuperate after the long journey to Yalta. A portrait artist snapped this photograph, which was the last to be taken. The following day FDR suffered a stroke and died, not living to see victory over Germany, which came less than a month later. (Franklin D. Roosevelt Presidential Library) 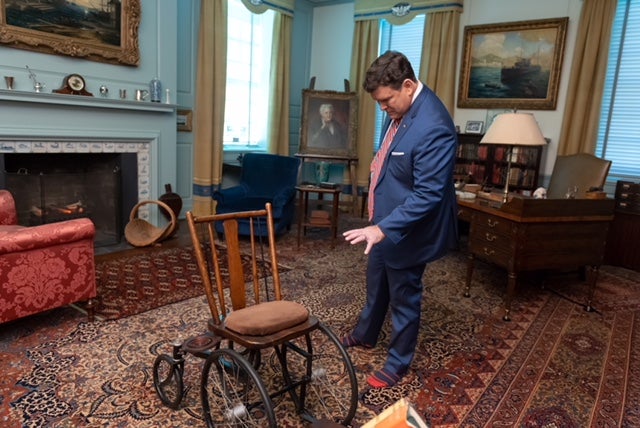 FDR’s study is preserved in its entirety with a beautiful Persian carpet given to him by the Shah of Iran during the Tehran conference. His armless wheelchair, which he preferred because it looked more like a regular chair, is small and utilitarian, with an ashtray attached. (Photo by Karl Rabe) 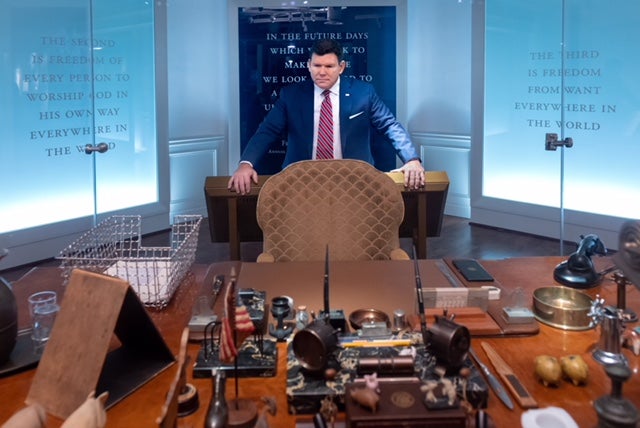 FDR loved novelty items, and they crowd his desk in the Oval Office: a set of Scottish terrier and West Highland terrier figurines mounted on magnets, an elephant figurine, a Missouri Mule figurine constructed of nuts and pipe cleaners—plus a photo array of his four sons in military uniform, a large ashtray, a daily calendar, a desk lamp, pens and pencils and other tools. (Photo by Karl Rabe) 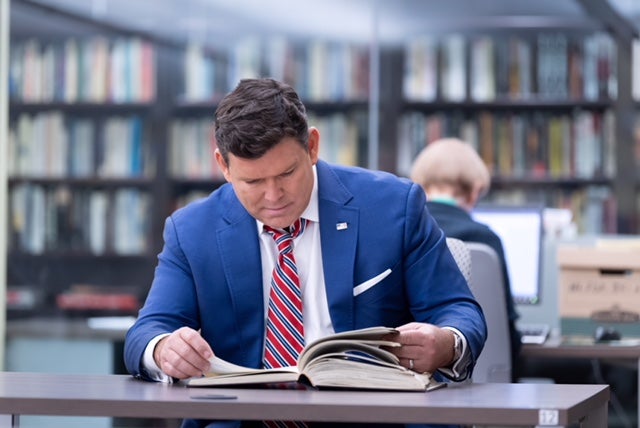 The documents of those critical days in Tehran are collected in a thick book. Reading it in the modest reading room of the Franklin D. Roosevelt Presidential Library, history comes alive. In my journalist’s eye, I see FDR, Churchill and Stalin as mighty yet flawed characters grappling with the world to come. (Photo by Karl Rabe) 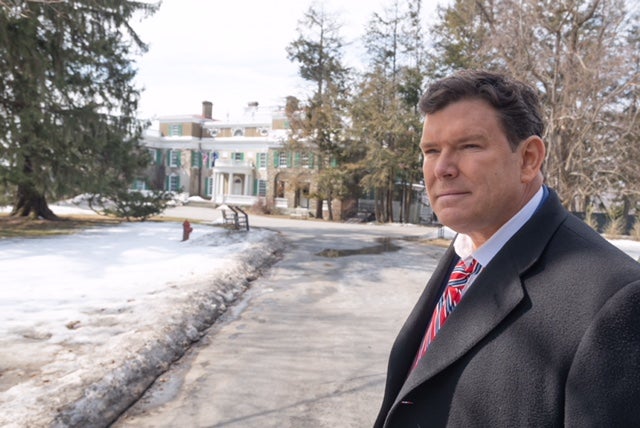 In Hyde Park, New York, standing in the long driveway, with FDR’s stately family home in the background, it’s easy to picture Roosevelt, his legs shrunken by polio and encased in steel braces, struggling for hours at a time, trying to walk again. He never succeeded. The road to recovery did not restore his legs, but perhaps the struggle gave him his destiny. (Photo by Karl Rabe)

“Three Days at the Brink is a compelling account of FDR’s political life and career. It is especially fascinating and intriguing when discussing the intimidate details surrounding the final days of negotiations among FDR, Churchill, and Stalin (and their surrogates) on the organization and future of Europe after the war. This book, along with Bret Baier’s two former books, distinguishes him as not only a renown journalist but a superb storyteller and historian. American can learn much from Bret Baier and his latest gem — Three Days at the Brink.”

“In this brisk, readable and compelling book, Bret Baier takes us into a crucial period of World War II and calls our attention to an important hinge of world history.”

“Bret Baier’s “Three Days at the Brink” gives us an exciting, moment by moment account of the Tehran Conference and its aftermath. Much of this well-researched and highly readable book is devoted to FDR and his leadership role in the three-day historic meeting, where he persuaded Stalin and a reluctant Churchill to agree to the daring strategy he advocated—i.e. the cross-channel invasion of Europe which ultimately defeated Hitler and won the second World War.”

“In the past three years, Bret Baier, perhaps America’s top newscaster, has become one of America’s best historians as well. In “Three Days at the Brink,” Baier completes a trilogy of books on the beginning, middle and end of the Cold War. For a third time, Bret Baier has identified and examined a pivotal event– lasting roughly three days– that enables him to combine political and diplomatic analysis with political biography. “Three Days” is a fascinating narrative that doubles as a political portrait of FDR and a history of the momentous Tehran conference at which FDR reached agreement with Churchill and Stalin on grand strategy against Germany. For it is FDR the visionary and leader who guides America through depression and victory in World War II. And the decisions finalized in FDR’s culminating meetings with Churchill and Stalin at Tehran, while assuring the defeat of Nazi Germany, could not resolve Soviet-Allied tensions inexorably leading the three powers towards Cold War. “Three Days at the Brink” , in sum, examines victory over Germany in light of the ensuing Cold War, as well as the human element and the complexities inherent in the conduct of international affairs in the world we inhabit. “Three Days at the Brink”– along with Baier’s books on Eisenhower and Reagan– will be widely read and discussed, and prove to be must reading for everyone interested in political biography, in history, the World War II, in postwar history, and in public affairs today.”

“Bret Baier’s Three Days At the Brink is a riveting reevaluation of how the Big Three leaders FDR, Churchill, and Stalin collaborated to win World War II for the allies and then created a Cold War superpower global order. With characteristic intellectual verve and brilliant analysis, Baier allows readers to freshly understand how the Tehran Conference shaped world history. Essential reading by a first-rate storyteller!”

“In his monumental new book about one of history’s most epic events, Bret Baier has outdone himself yet again. I could not put this extraordinary book down. Three Days at the Brink is a masterpiece: elegantly written, brilliantly conceived, and impeccably researched. This book not only sparkles but is destined to be a classic!”

next
Three Days in Moscow