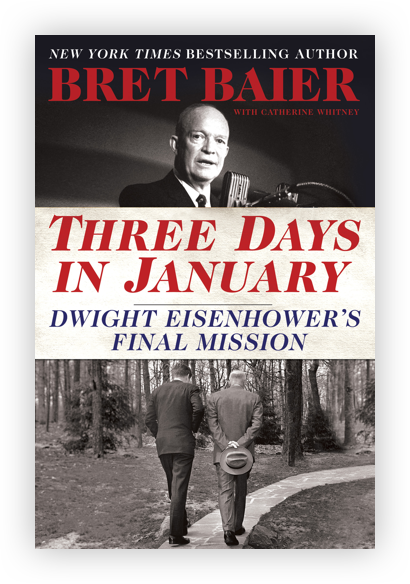 In January 1961, two men prepared for the most significant change of power in a generation. In the course of three days Dwight D. Eisenhower and John F. Kennedy would both make speeches that resonate to this day. Three Days in January captures the dramatic tick-tock of that critical week and reveals what it means for us now as we approach a high stakes change of power in January 2017.

Autographed copy available from this bookseller:

In the young readers’ edition of his New York Times bestselling book, Fox News Channel anchor Bret Baier tells the story of President Dwight D. Eisenhower’s final mission: passing the torch to his young successor, John F. Kennedy, and preparing both the country and the new president for the challenges ahead. 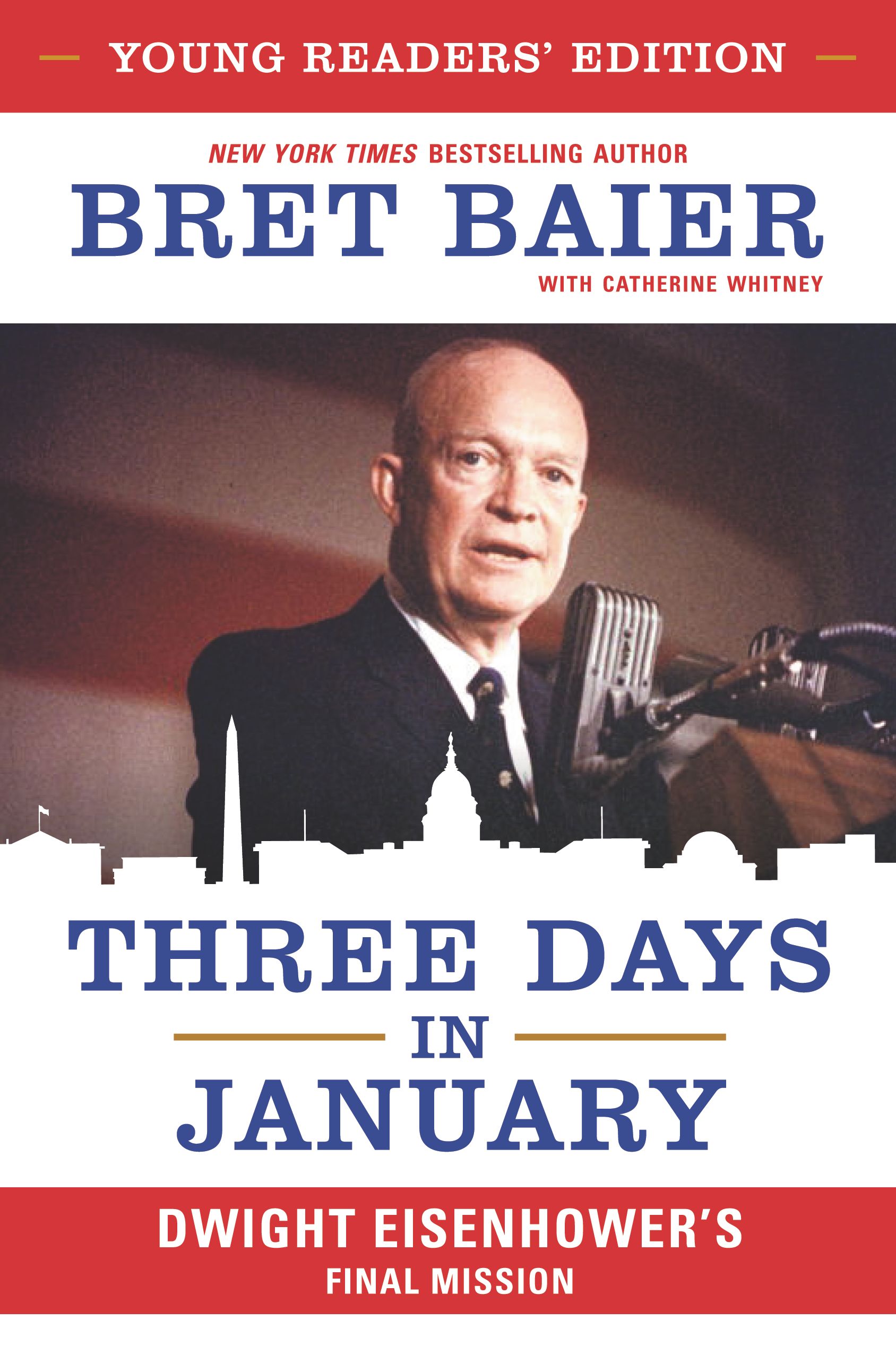 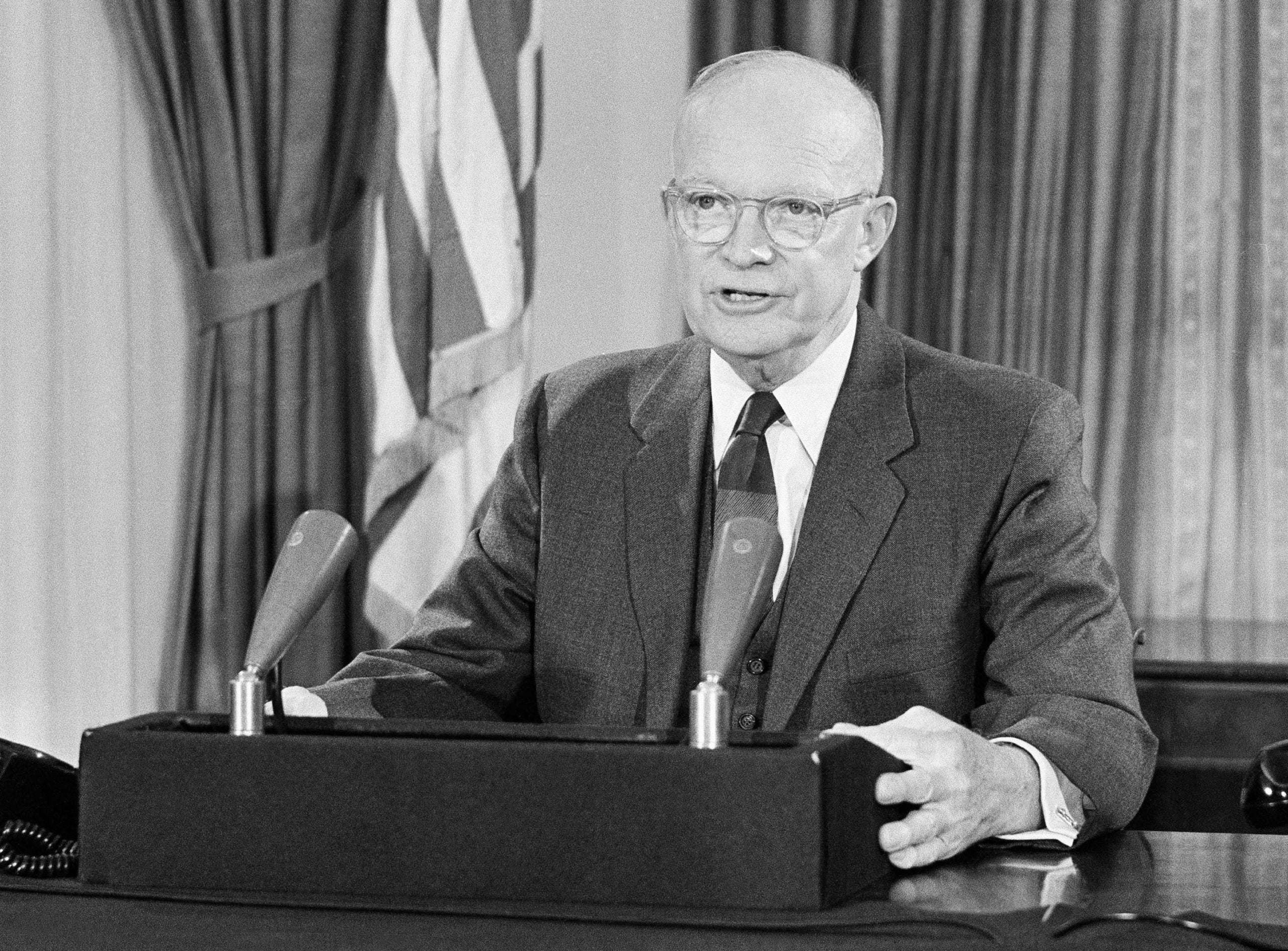 Seated at the “Roosevelt desk” in the Oval Office, looking into the television camera, Eisenhower delivered his final address to the nation. It would become acknowledged as one of the most important ever delivered about America’s role in the world. Today we are once again able to appreciate its relevance. Photo by Bill Allen/Associated Press. 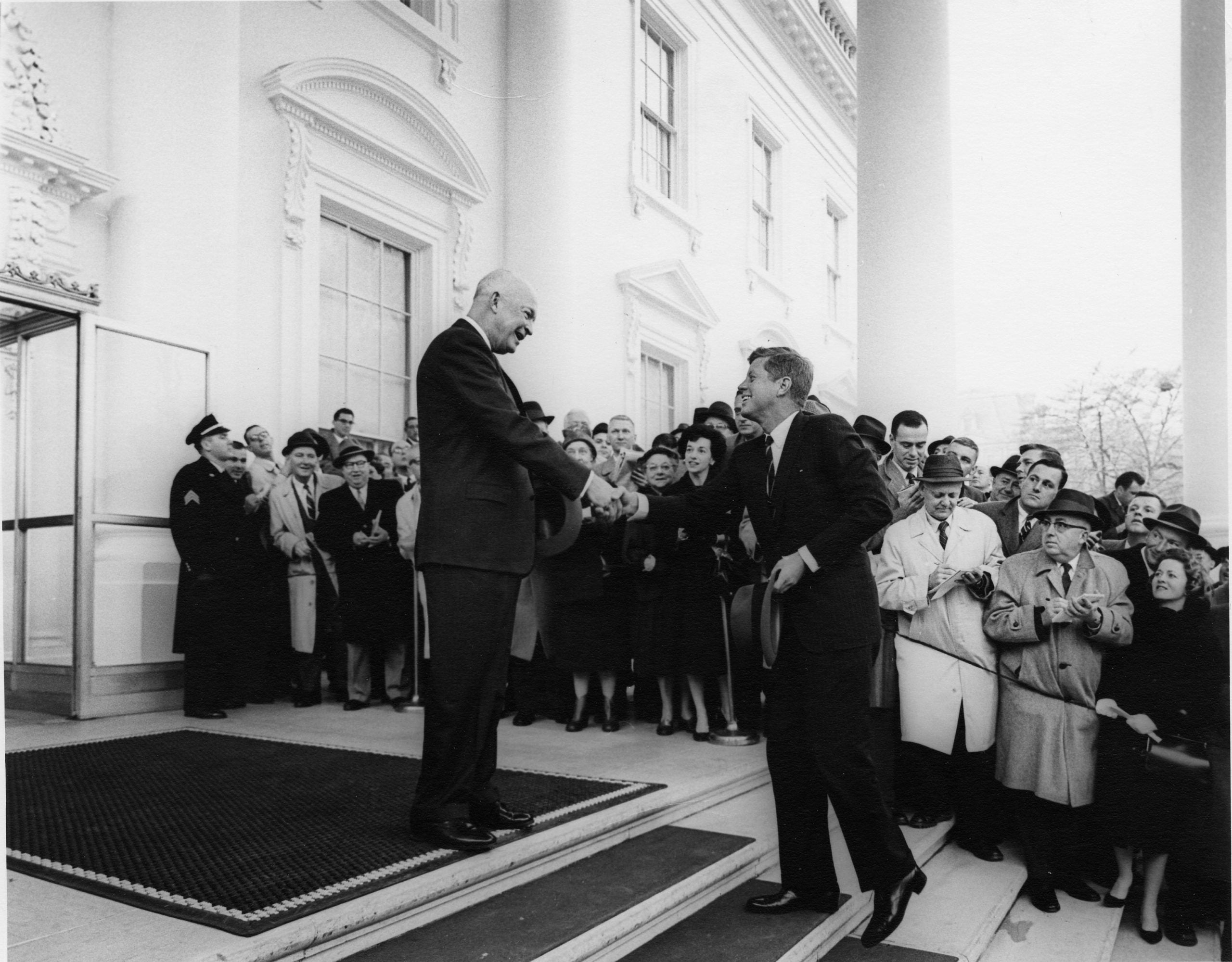 On December 6, 1960, John F. Kennedy, the new president-elect, arrived at the White House for his first meeting with President Eisenhower. Kennedy came alone, without an entourage, and Ike greeted him at the North Portico before they began the serious work of the transition. National Park Service photo/ courtesy of the Eisenhower Library. 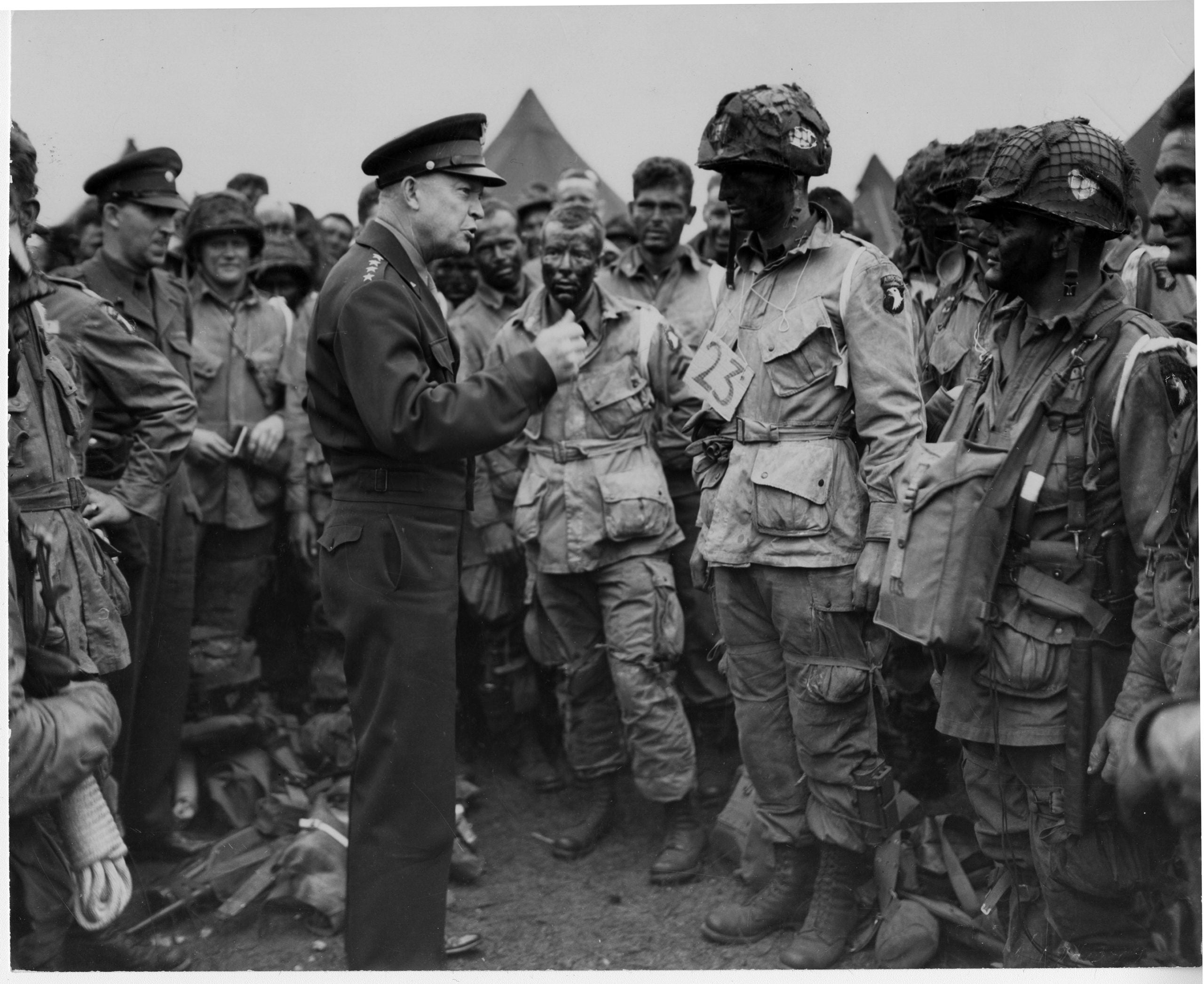 As commander, Ike had a personal relationship with his troops. Here he is chatting informally with paratroopers from the 101st Airborne Division on June 5, moments before they took off for the Normandy coast. U.S. Army photo/courtesy of the Eisenhower Library. 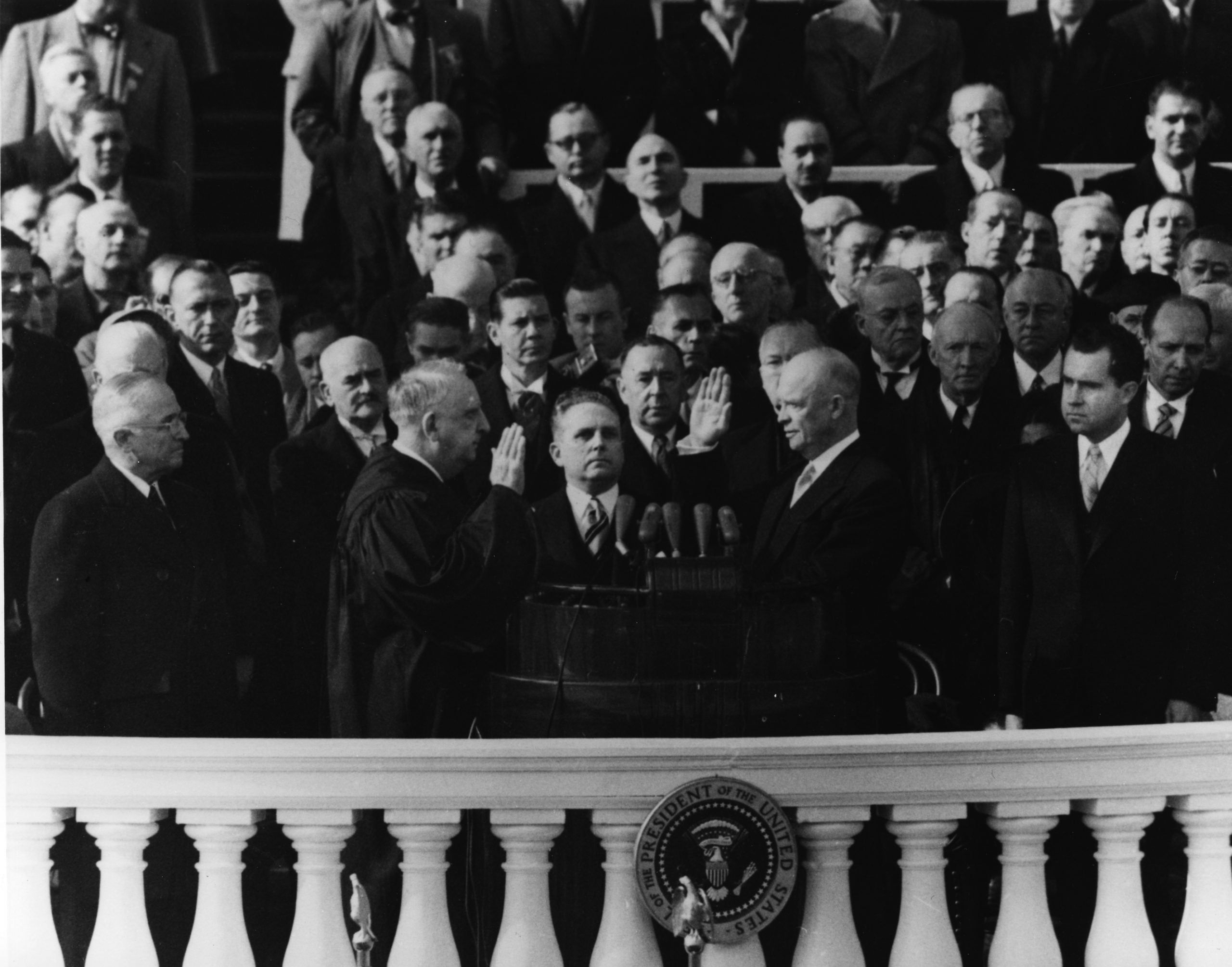 Ike took his oath of office on two Bibles—one, a gift from his mother when he graduated from West Point; and the other, the Bible George Washington used to take his oath as the first president. National Park Service Photo/courtesy of the Eisenhower Library. 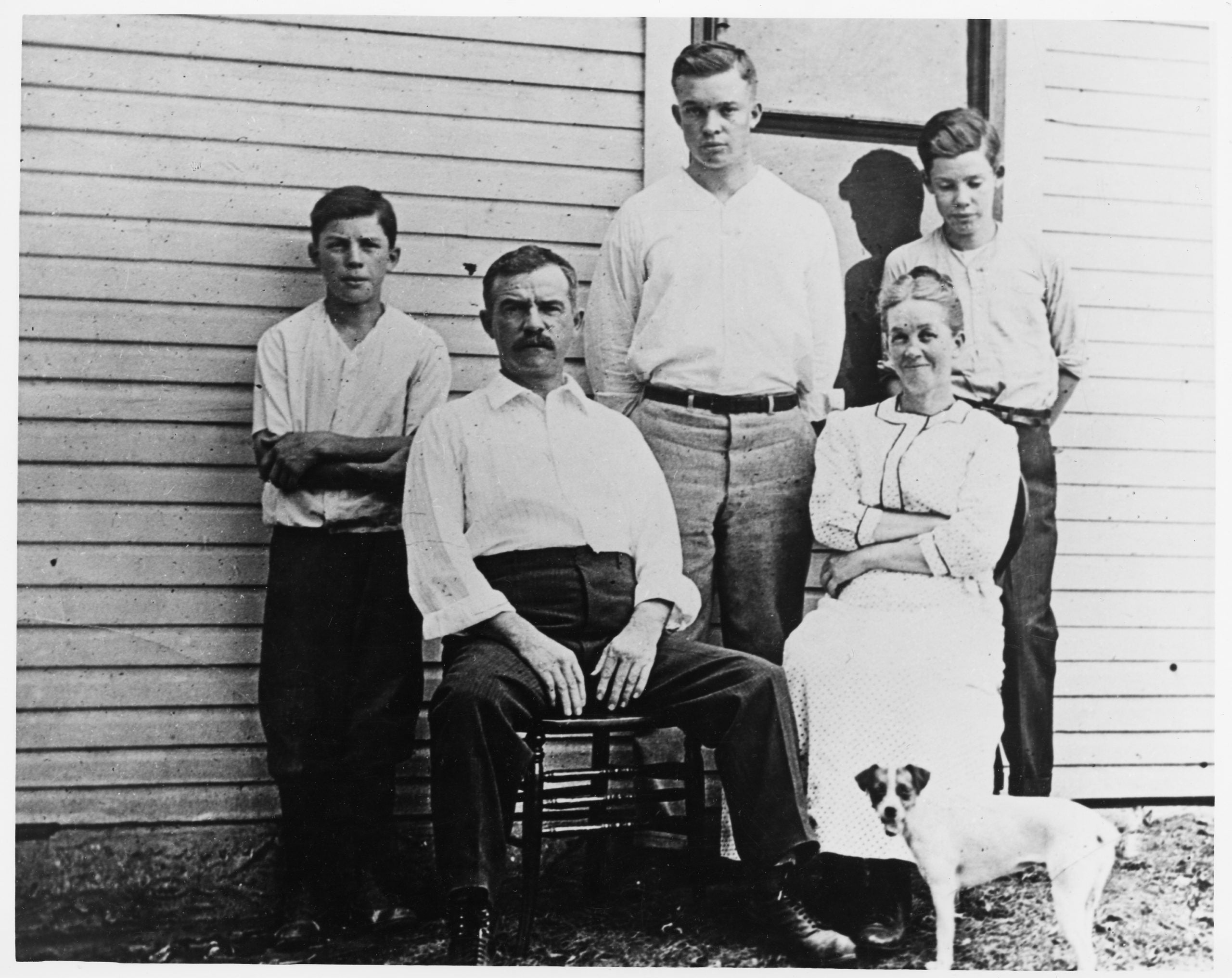 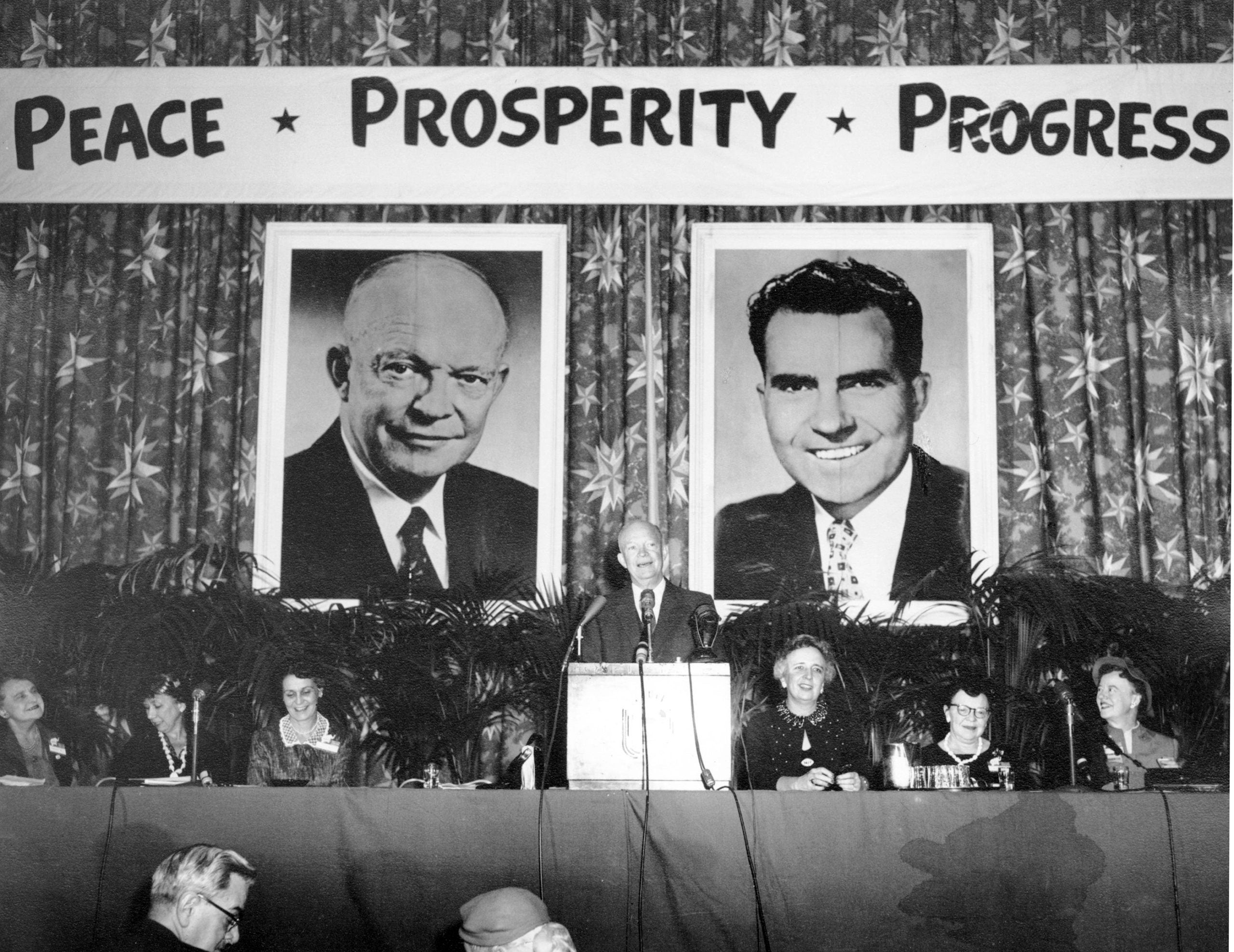 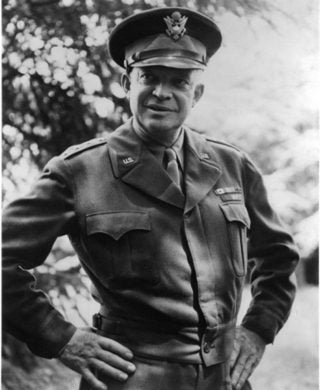 This view of Ike as commander of the allied forces during World War II, endures as America’s most treasured image of the man who saved the world from Hitler. He was buried in his uniform. Photo courtesy of the Eisenhower Library. 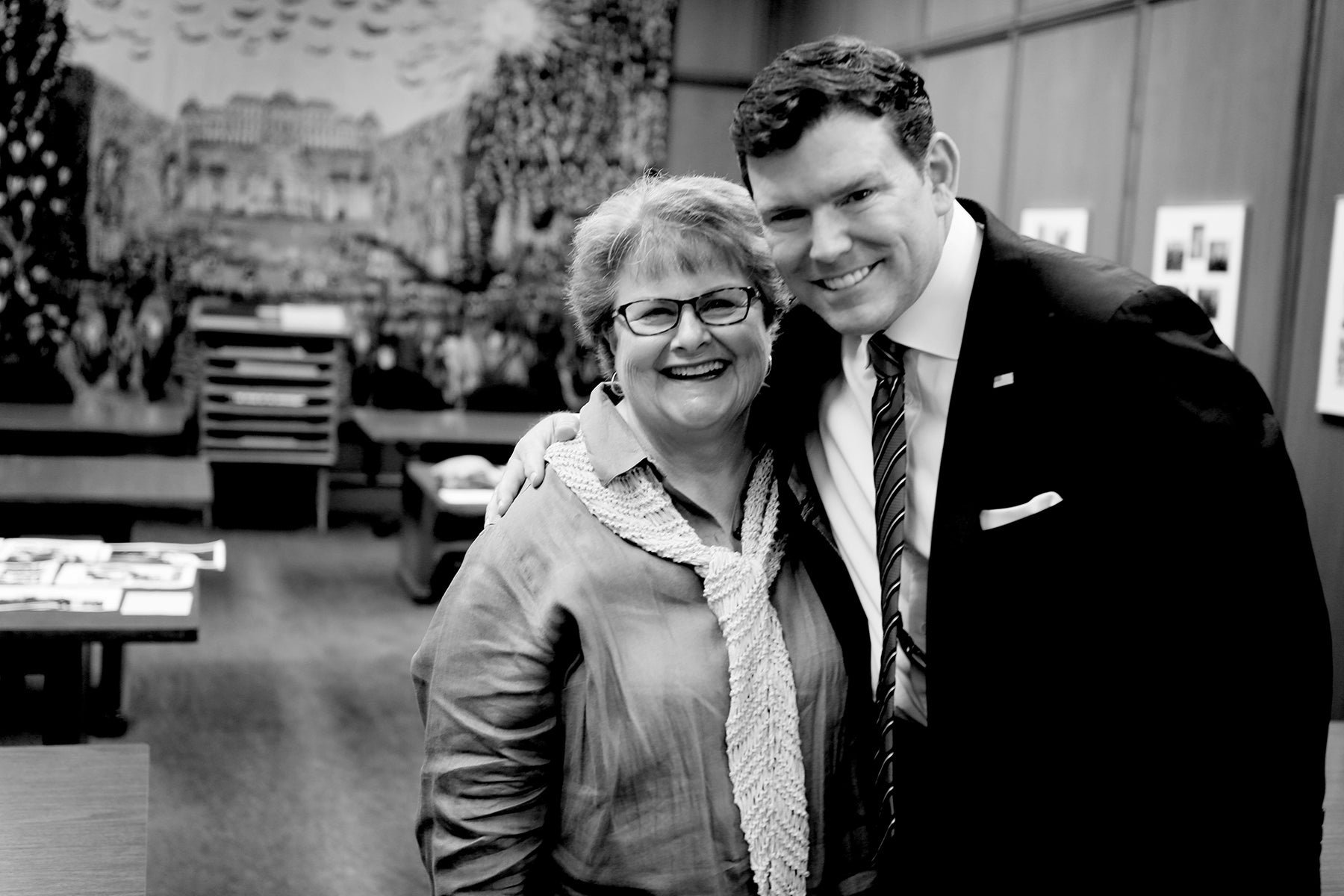 Thanks to my talented presidential researcher, Sydney Soderberg, a Kansas resident, I had access to a special view of Ike’s life. Sydney practically lived at the Library during the course of our work together. Photo by Cory Keller 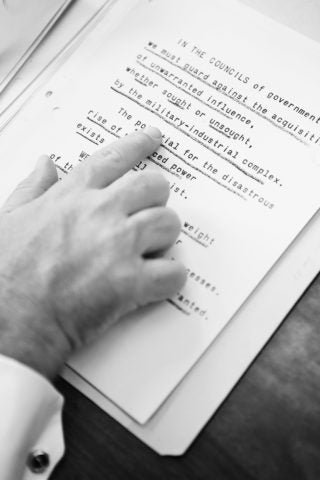 With underlining for emphasis, the finished text of the speech contained the warning that resonates to this day: “In the councils of government, we must guard against the acquisition of unwarranted influence, whether sought or unsought, by the military-industrial complex.” 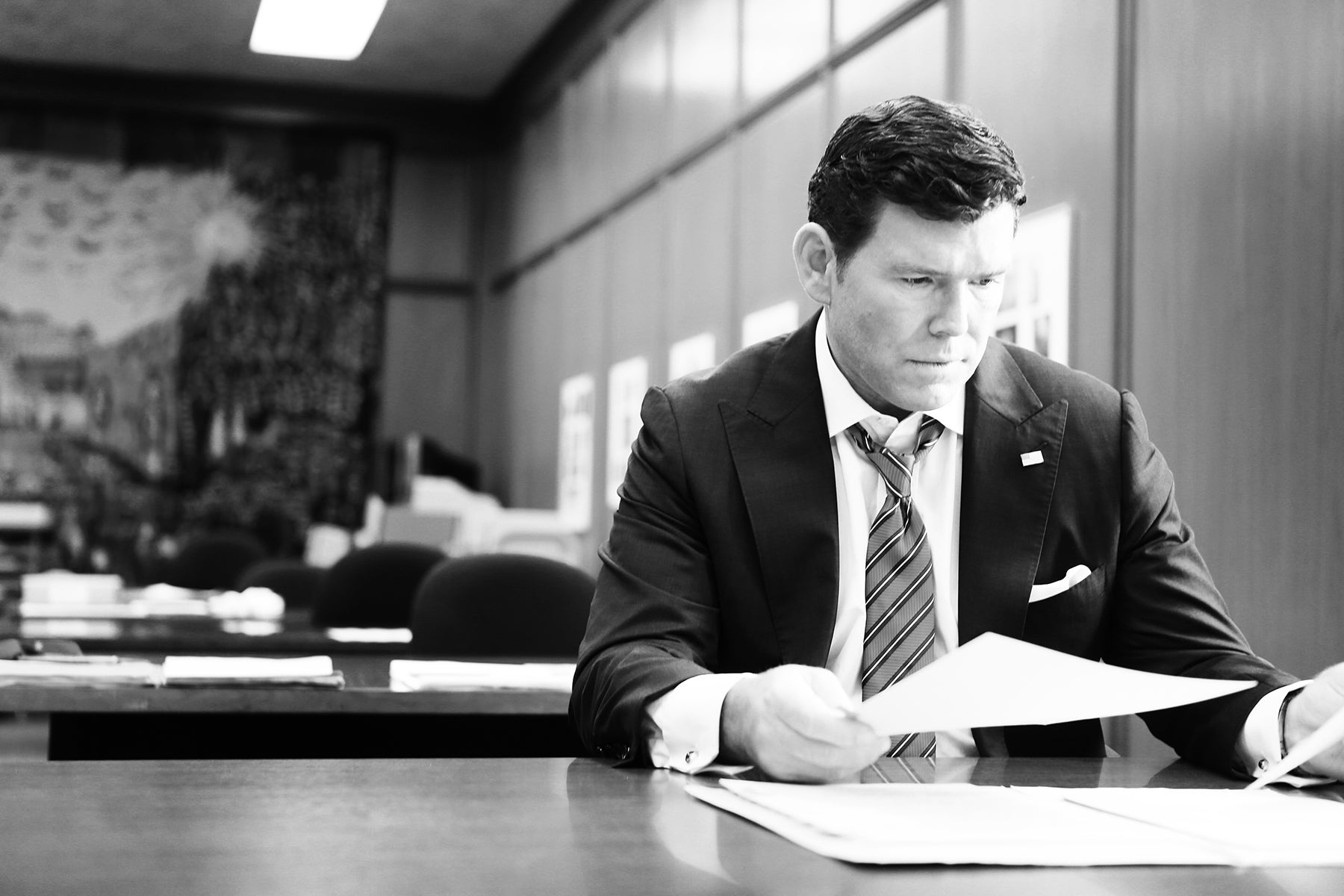 Holding in my hands the actual text of Ike’s Farewell Address—in its many versions, with Ike’s editing pencil in evidence—was a stirring experience. Photo by Cory Keller. 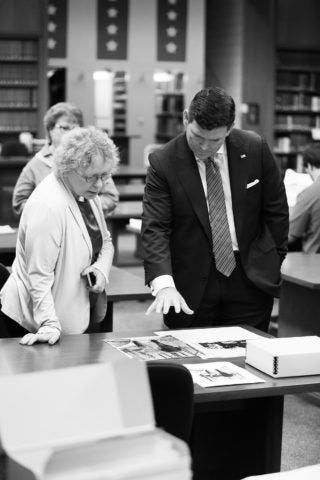 My co-author Catherine Whitney and I had our work cut out for us at the Eisenhower Library, which houses 26 million pages of manuscripts, 335,000 still photographs, and more than 28,000 volumes of books. Photo by Cory Keller. 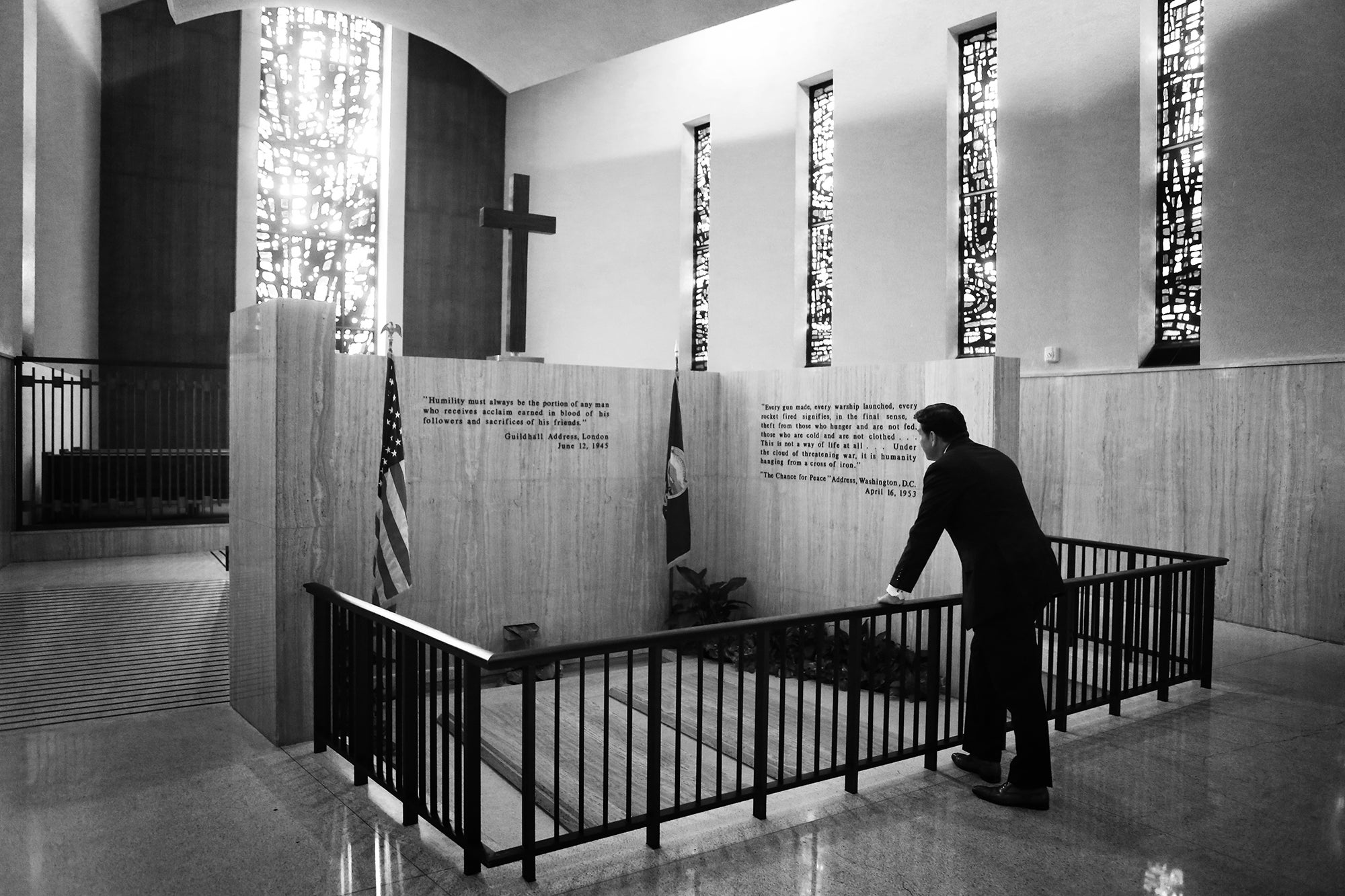 Standing in the peaceful setting of Ike’s chapel, where the 34th president was laid to rest, I could feel the power of his presence. Ike’s grave is surrounded by engravings of his most significant quotes, including the prayer he wrote for his inauguration, calling on God to help the nation unite in common purpose. Photo by Cory Keller.

“Bret Baier has given history a great gift – a riveting account of Dwight Eisenhower’s determination to call on his vast experience to prepare America for the perils of the new war, the cold war.”

“Bret Baier has written a great book about a great president. Three Days in January brings us the true story behind Eisenhower’s legendary farewell address, the passions that went into it, and the lessons in leadership that ‘Ike’ offers to today’s era of polarization and gridlock.”

“Bret Baier’s book succinctly captures the essence of Ike’s leadership style. Through stories and the keen observations at the time, Baier makes Ike’s world view and philosophy come to life. Three Days in January is a great read.”

“Magnificently rendered, Bret Baier’s Three Days in January is destined to take its place as not only one of the masterworks on Ike, but as one of the classics of presidential history. This is a too little-known but remarkable story filled with drama, power, and enduring lessons for leadership today. Impeccably researched, the book is nothing short of extraordinary. What a triumph!”

“As General and President, Dwight Eisenhower was one of the greatest leaders in American history, and Bret Baier’s book is a welcome and valuable contribution to our appreciation of Ike, describing some of his most important qualities of character, wisdom and leadership, which are so needed in the public figures of our own era.”

“In this absorbing book, Bret Baier describes Eisenhower’s famous farewell address as the “final mission” of a “man of war who craved peace.” My grandfather once said famously, “The problems a president faces, are soul racking. The nakedness of the battlefield, when the soldier is all alone in the smoke and clamor and terror of war, is comparable to the loneliness — at times– of the presidency… no one, with the exception of his predecessors, knows what it is like.” Three Days in January brilliantly captures the drama of January 1961 when Eisenhower passed the torch to JFK, and offers timeless guidance for a peaceful, prosperous and powerful America. Three Days in January is the BEST book on Eisenhower– and the best book written about a presidential speech– to appear in a very long time.”